I have to start by saying a big thank you to so many of my friends who have responded so generously to my last post. Each pledge has touched me and if I didn't know it before, I certainly know now how generous my friends are. I have to say a special thank you to my parents for going the extra mile - carrying printed copies of my blog with them and telling everyone they meet about my experiences here. Mom and Dad, you're the best!

The baby I wrote about in the last entry is doing great! We were able to buy them several days worth of food, as well as baby clothes and bathing stuff that she will need. We also dropped off a giant gallon of water to keep Mama hydrated and thus Baby breastfed. Right now, there are two ladies ready to give birth at any moment. We advised them to get to the hospital now, but they don't have money for a taxi. Thanks again to the money everyone raised on my behalf, we were able to assure them that we can help them. It's a good feeling! 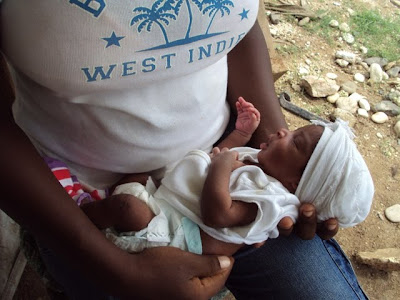 I had a friend here who was working as an occupational therapist at the big hospital in Jacmel. For some reason, a little girl was referred to her for therapy. This was a little girl of 3, who looked like she was 1. She was unable to walk or talk, looked malnourished and was extremely fatigued. This baby didn't need therapy (and psychology - the other part of the referral), she needed to be hospitalized. The mother of this child lives far away in the mountains and felt like she could no longer care for her properly, so she left her baby girl in an orphanage. When we found out about the baby, we were able to override the referrals, and get her immediately hospitalized. Phew! 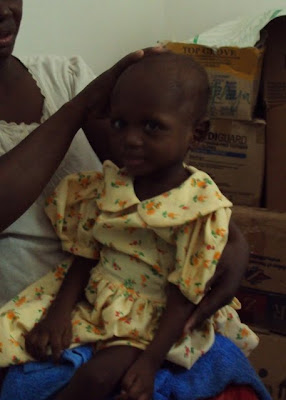 The doctor that made those ridiculous referrals comes from one of the NGOs here. We know of another case where he put a cast on a 10-year-old girl's arm that was so tight, within two weeks, she lost complete sensation in her hand. She will likely have to get this hand amputated, for no reason whatsoever. This is a big problem at the moment - there is no standard of care here. The worst part is that you can't do anything about it. You can talk to the WHO, who will in turn make recommendations that certain people or groups be stopped from working here, but that is the extent of it. It is up to the Haitian government to take the actual step of removing them, which then becomes a political problem.

As ever, take the dire example of Pinchinat. There is a military group from one country that is installed as official leader of the camp. But they are failing to provide adequate care and it is largely because of them that Pinchinat is in the state it is in. The WHO has recommended their removal, but the Haitian government won't remove them because they have an understanding at the federal level with the government of that country. But who suffers for that political understanding? It's the 8-year-old girl who was raped and her friend who was blinded in one eye when she tried to stop the rape, because there isn't adequate security here. It is the 11-year-old girl who was raped and is now 3 months pregnant, because there is a massive gap in the medical care here. It is the woman who gave birth on a mud floor in the rain with a male volunteer by her side and a razor as a surgical tool. It is the 16-year-old girl who is now a prostitute so that she can get (the free) food for her family, because there is an underground trade system in place here.

Of course, Pinchinat is not the only camp that is suffering. There is another camp in Jacmel located at the edge of a river. They only need one hurricane to hit for this entire camp to be wiped out. This camp is lacking proper latrines, so residents have been defecating into the river - the same river they wash themselves and their clothes in. They are also lacking drinking water and drink from the same river. Of course, conditions don't need to be so bad to make camp living intolerable. 6 months of hot days, hot tents, boredom, and lack of any change for 1.3 million people is more than enough to make life unbearable.

The current strategy is to encourage people to get out of camps and return home. Many camp residents are landowners and don’t need to be living in camps, but they do it to capitalize on the free services. In order to encourage them to leave, there are incentive programs in place, including several weeks worth of free food, hygiene kits and NGOs funding and building new homes for them. In fact, last week, I helped with a food distribution that the IOM organized, giving 3 months worth of food to 65 families who have already moved home. It was an interesting experience, at once satisfying, serving people who are returning to what will surely be a better situation for them, but at the same time, it was hard knowing that so few families are this lucky.

For Pinchinat, 203 families are without such luck. They are not landowners, and have nowhere else to go, but because their current situation is so desperate, they are being moved to a new camp. This new camp has been under construction for the last several months. Because there are site planners and engineers and experienced NGOs involved, this new camp will certainly address some of Pinchinat's problems - the latrines are in the middle of the camp, so there is less of a security issue for women and children. There are roads running through the camps, with proper ditches for drainage. There are already more security guards at this new camp though no one has moved there yet. A new hospital is being built on the camp grounds. But, as with many other relocations taking place around the country, these residents will leave the tents of Pinchinat only to move into tents at Mayard. While this is certainly not ideal, at least each family will have their own tent (instead of several families squished together at Pinchinat), and these tents will eventually be replaced by transitional shelters and then, hopefully, real homes. Construction for a child-friendly space has already begun and there is a big space allotted for the community. It is this space which especially interests me.

Since it looks like residents will be here for the next three years, we are proposing that an actual community centre be built here. We recognize that though the current philosophy is to get people out of camps (and the strategy to accomplish this is to make camp life unappealing....as if it wasn’t already), we are also looking at how to make life better for 203 families that have no other choice. We want to use this centre to run community-based programs and thus help to combat the lack of education here. Along with many partnering NGOs, we would like to start courses on health (for example, nutrition, STDs, reproductive health), gender-based violence (teaching people what it is and what resources are available), education (literacy classes, vocational classes, language classes), and cultural programs (showing documentaries, etc). We want to give residents something to do, while giving them a way to better there lives. This won’t be easy to do and, of course, we are waiting for the go-ahead so that we can start building.

This is a project near and dear to me. I so badly want to make life better for people who have had suffering heaped upon suffering. If my donors are in agreement, I would like to use part of the funds raised towards getting this centre built and getting the classes started. Hopefully the next time I write, it will be with an update that we got the go-ahead. Fingers crossed!
Posted by AuthorAnonymous at 3:52 PM