I had promised myself to see more of Haiti this summer, since I was going to be here for three months this time. Jacmel is pretty small and after six weeks of driving along the same main road every day, back and forth, I was ready for a change. So when I heard of a couple of health assessments that needed to be down in nearby towns, I jumped at the chance.

We went to Bainet a couple of weeks ago. This is the next town west of Jacmel, right along the southern coast. It’s only about 40 kms away, but I was told to prepare for a long journey. They weren’t kidding. It took us three hours to get there, driving on the bumpiest road I have ever been on, up into the mountains. It would have been a beautiful drive had my head not been bouncing around crazily. But as we crested the mountain, we could see Bainet below us, bright and colourful, with the ocean just beyond. Gorgeous!

Bainet itself is an old town, like Jacmel, with interesting architecture and old narrow roads (so narrow, in fact, that we had to do practically an 8-point turn to get into the street housing the town clinic), with a population of 70, 000 people. I had already heard that there was a hospital here, but that it was not fully functioning due to staffing issues. We found a few more problems than we bargained for. The clinic is named The Bainet 10 Bed Clinic. It is, in fact, Bainet’s only medical facility, and it only has 10 beds. This place has one operating room that is currently being used as a storage space. There is a dentist’s office, but no one knows if the equipment still works, since they haven’t had a dentist in 4 years. There is one labour and delivery room, but as a woman, I would never have used that room – a small cramped space, with two half beds with stirrups (so women have to sit up, there is no other half of the bed to lie down on) and a non-functioning bathroom. In fact, none of the bathrooms at the clinic are functioning. The facility has a small generator for electricity, but they don’t always have money to keep it running on gas - they have been known to deliver or suture people up in the dark. Pregnant woman tend to stay at home for deliveries and children rarely come here to receive care. If there are any urgent cases, or complicated deliveries, patients are referred to Jacmel’s St. Michel hospital. Bainet does not have an ambulance.This means that patients requiring surgery, women in labour that need a c-section, or patients that cannot be covered in Bainet, have to travel that bumpy road for 3 hours by moto to get to Jacmel. 3 HOURS. On a motorcycle. Unbelievable.

A few days after, we went to do an assessment at Anse-a-Pitres, a town right at the Haiti-Dominican Republic border. It is a smaller town, only 27, 000 people, but, as a bordering town, there is quite a bit of human trafficking, mostly in the form of prostitution. There is quite a bit of gender-based violence here. While we were there, we were told of several cases of rape involving young girls, including one girl who who was pregnant at 14 years old with her second child. She had her first child when she was 11. Anse-a-Pitres is about 80 kms or so from Jacmel, but it takes anywhere from 7-9 hours to get there because of the roads. In fact, if one decided to do this journey by car, it is preferable to go up to PAP and back down east, rather than head directly east along the southern coast from Jacmel. This clinic does not have an operating room and again, most women deliver at their homes. They have one vehicle to offer their urgent cases – a moto, of course. And it takes so long to get to the nearest Haitian hospital, that urgent or complicated cases are always sent across the border to the DR. This is not good.

The worst thing about these two towns is that neither was really damaged by the earthquake. This is the standard of care that has always been offered here. No standard at all. Happily, however, we should be able to help with the staffing.

Oh, by the way, I did not drive the 7 hours to and from Anse-a-Pitres. This was my ride! 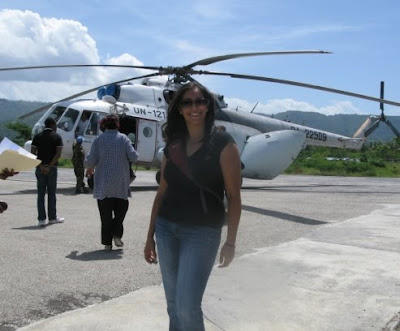 Posted by AuthorAnonymous at 7:19 PM